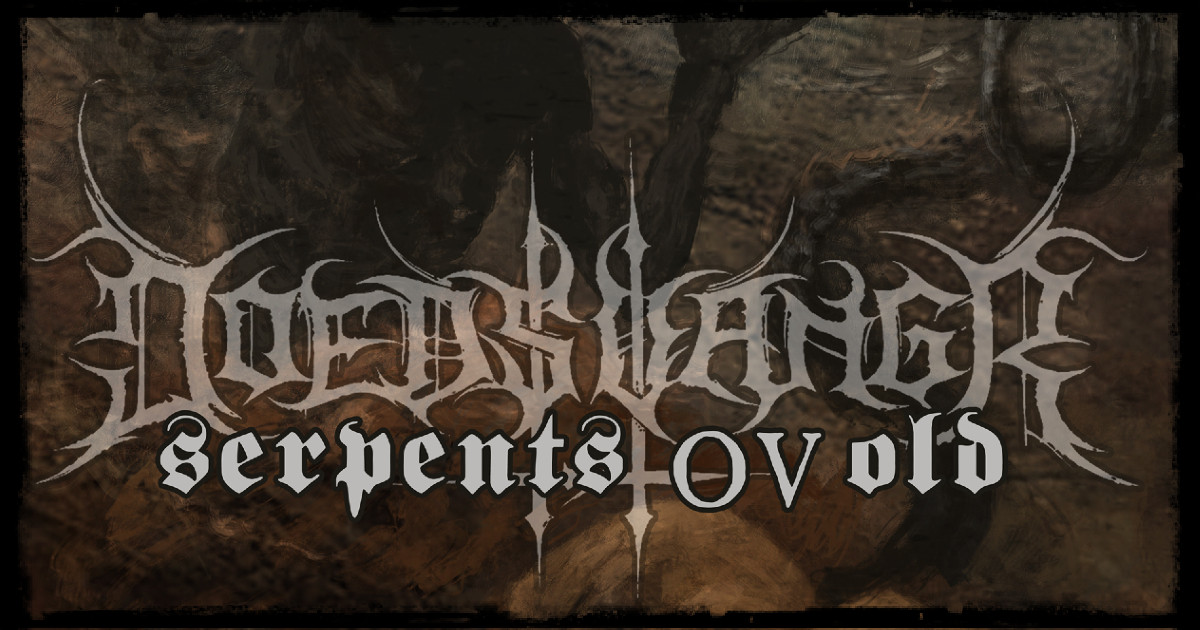 For the eleventh part of our "retrospective" series, we look back on a traditional piece of crushing Black Metal, namely DOEDSVANGR's "Serpents Ov Old". Check the other already published pieces of our retro blogposts by clicking on the band name: THE AMENTA, AARA, FORHIST, ANARKHON, INFERNO, WHITE WARD, PERILAXE OCCLUSION, KRYPTAN, MODERN RITES & LIGHT OF THE MORNING STAR.

Brooding in the shadows for a couple of years, the international Black Metal project DOEDSVANGR introduced guitarist BST (THE ORDER OF APOLLYON) in 2020 and completed their second album shortly afterwards. The successor to the 2017 released "Satan Ov Suns" stays true to the Black Metal path but is richer in detail and shows greater dynamics in the individual compositions. "Serpents Ov Old" additionally impresses with guest vocalists Nag (TSJUDER) as well as Vicotnik (DØDHEIMSGARD) and was released on October 29th.

DMP's Jonathan got blown away by the sheer power and brutality of the album:

"DOEDSVANGR's new album "Serpents Ov Old" is one of the few records which manage to evoke an all-embracing wall of sound in the first few seconds without sounding stump and boring. The last album I remember which had this specific vibe was GORGOROTH's "Ad Majorem Sathanas Gloriam". However, DOEDSVANGR's work of Art additionally delivers greater variety between the individual songs on the album and displays a talent for weaving vital melodies into their songs without losing power and forcefulness. Also, guitarist BST who is additionally responsible for the mixing and mastering of the album had a clear vision what sound these compositions need to breath and to unleash their full potential. Listen to the impulsive and blasting title track, to the aggressive, yet at the same time groovy (in the last third of the song) 'Imperialis' as well as to the epic and slower 'Poisonous Tides' with its gargling vocal lines and you will immediately understand the quality of this record. "Serpents Ov Old" feels fresh and powerful, yet at the same time deeply rooted in tradition – exactly as a Black Metal record should sound!"

Guitarist Shatraug narrates about the year 2021 and the release of DOEDSVANGR's second album:

"I do not really follow the public reactions or opinion anymore. After three decades of creating Black Metal, it is perfectly clear to me what it should be: a manifestation of heart and soul with spiritual devotion, and little else matters. "Serpents Ov Old" is the result of long incubation and sudden execution – initially it started back in 2019, if memory serves me correct, and took its final form quite fast when BST joined the project. 2021 itself has been nothing grand on a larger scale, and it's still looking grim. But at least there is plenty of inspiration around, one could cut the air as it is so full of tension."

Vocalist Doedsadmiral describes the plans for the future of the band:

"Slowly we have started thinking about a new album, since our musical lives are still on hold. But we have no deadline, and we feel no need to rush. It will take form when the time is right. Concerning the live-shows: we have been booked for quite a few festivals, but all is still uncertain due to Covid-19. We were supposed to play Bloodfest Zarazoga in Spain on May 1st, but it is either cancelled or moved. We scheduled our release gig in Oslo on February 19th, but we will also have to see whether it needs to be moved. And we are also playing Subterranean Manifestation in London, on October 22nd. Some more festivals are also confirmed and will soon be announced."