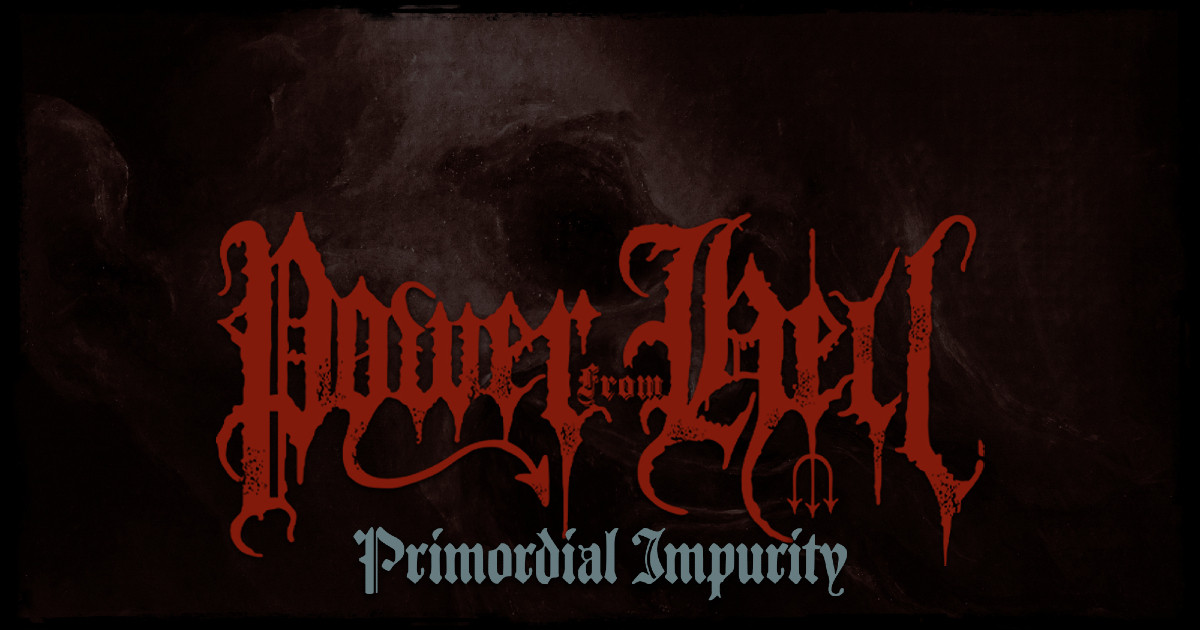 In collaboration with Decibel mag, Brazilian band POWER FROM HELL premieres a second song from their upcoming album, "Shadows Devouring Light". Focusing on the gloomy and eerie elements of Black Metal, 'Primordial Impurity' evokes a particularly hypnotizing atmosphere. The mesmeric rhythm and riffing in combination with the harsh, yet perspicuous vocal lines and the raw production transport the listener directly into the blasphemous soundscapes of the early 90s.

Check the song via Bandcamp or on our YouTube channel:

Frontman and composer Sodomic comments on the musical influences that shaped 'Primordial Impurity' and the new album:

"It's hard to define those, but we can separate things into two parts:

Firstly, at the beginning of the band - I am talking about the first 3 or 4 albums - our biggest influence was BATHORY. This does not only account for the music, but also concerning the fact that we did not do live performances at that time. So, all BATHORY albums are very important and a great influence for me, especially in the early years of POWER FROM HELL.

Secondly, with the album "Profound Evil Presence" we started to include some elements of the second wave of Black Metal in our music and, of course, the Norwegian scene played an important role in this process. Concerning the albums from that period that were important to me, the list is rather extensive. But I can say that the first EMPEROR, DARKTHRONE and SATYRICON albums have a special place in my mind and personal collection."

"The lyrics are about the eternal human conflict between the sacred and the forbidden in the context of sexual acts, thoughts, and desires. These were seen throughout our history as something heinous by many cultures, people, civilizations and, of course, by most religious doctrines. Many times, this was purely hypocritical since history documents unspeakable sexual acts and sexual crimes in the name of some 'gods'.

That kind of sexual rebelliousness imprinted in our DNA is still one of the things that most strongly bothers some people and spreads absolute horror. This theme has haunted humans for millennia. Therefore, here I make a parallel with the parable of the original sin used as a backdrop to describe that from the moment the forbidden fruit is eaten, all human misfortunes, internal and external, begin. I regard it as the first act of absolute impurity, or in other words, the primordial impurity.

The profane feminine is also addressed here in the archetype of the filthy woman, the one who came into this world only to corrupt men, from Eve to Jezebel to the daughters and wives of 'god's ministers.' There are only two things that never sleep in this world, evil and lust, and therein lies the relationship with the album title: the shadow of desire that never sleeps and is often utterly impure, stalks humans and is able to devour the last spark of an individual's light."

"Shadows Devouring Light" will be released on CD & vinyl (including exclusive DMP editions) as well as digitally, accompanied by high-quality merch as t-shirt (men/women) and hooded sweatshirts, on September 30th. Pre-orders are possible via our EU, US (no merchandising) and Bandcamp shops. Find further info about the album here.