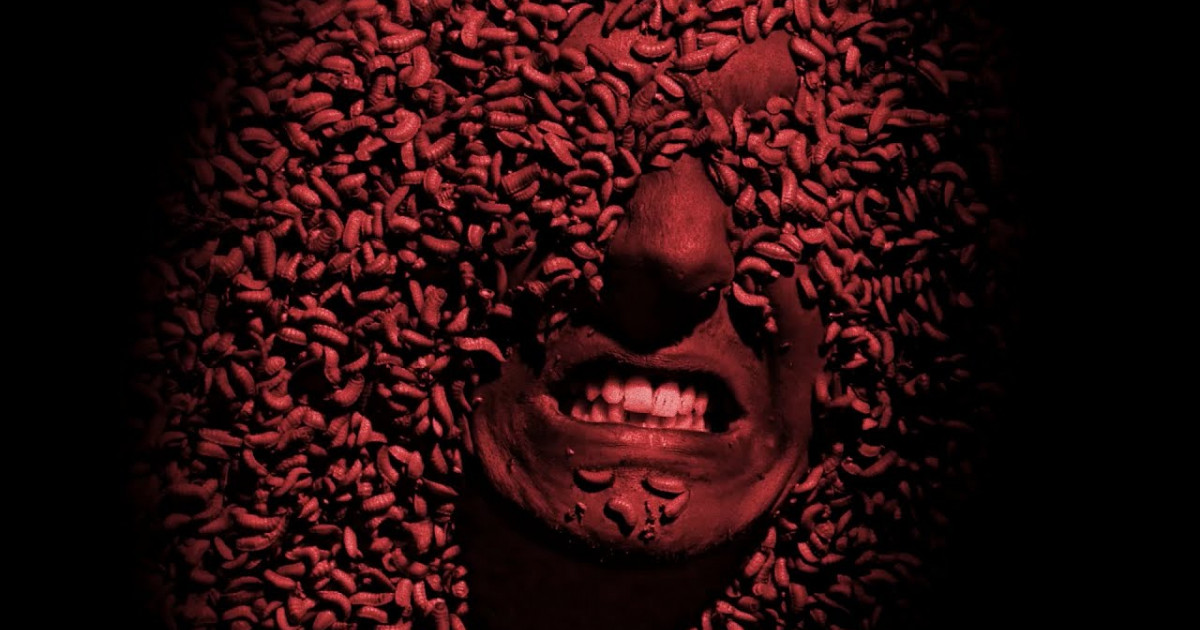 THE AMENTA - video for 'Twined Towers'

Succeeding their 2013 released long player "Flesh Is Heir", THE AMENTA proved with "Revelator" their potential to reinvent themselves and to crush conventional expectations. Far from simply abandoning their roots, the Avantgarde Metal band managed to accentuate other, and often overlooked, aspects of their Art while still preserving key elements of their signature sound. This also accounts for their particular interest in combining visual and musical elements.

Director/producer Garth Hurley (CRT Films) and vocalist Cain created a surrealistically disturbing movie for the song 'Twined Towers', thus bringing the series of videos for "Revelator" to an end. Today, we proudly unveil THE AMENTA's latest visual work in collaboration with renowned webzine No Clean Singing. Editor Islander describes the clip as "jaw-dropping" and "skull-exploding" and sums up the effect of the video and song combined the following way:

"The song itself is wide-ranging and frightening, a surreal amalgamation of torment and fury, of soaring grandeur and nerve-wracking tension, of searing intensity and hypnotic mystery, of bone-smashing heaviness and hallucinatory frenzy. Deeply unsettling, it’s also relentlessly captivating. Combined with the video, it becomes even more unforgettable."

Vocalist Cain narrates about its creation:

"'Twined Towers' is really the centerpiece of the album, and perhaps the most cinematic. As it is also the longest track on "Revelator", we did not know how plausible this would be when we first got the ball rolling with these videos. However, the song itself was received remarkably well, and heralded as an album highlight by most listeners. As time rolled on and we released the first few videos, it seemed more and more necessary that this song should have its moment in the spotlight. I felt that this one should be treated more as an 'art piece', whereas 'Sere Money' and 'Psoriastasis' had more of a 'story' feel to them, and 'An Epoch Ellipsis' was more of a classic 'band video'. Naturally, Garth Hurley (CRT Films) was brought back into the fold, who had worked with us on the previous "Revelator" videos, and was very happy to take a fresh direction with the song. This gave him more room to experiment with various elements which all tied together wonderfully in the end."

As it is the case with THE AMENTA's aural art, the moving pictures feature different visual techniques and elements mixed with each other to bring about a deeply disturbing and eerie atmosphere. Cain explains the various ideas behind the clip:

"It started with the 3D animation which was masterfully designed and crafted by Valnoir of the legendary Metastazis design studio, and which was inspired by Tim's lyrics. Once that footage was sync'd with the intro of the song, all I had to do was listen to the song very loud in a dark room and watch the animation. As the camera circles the tower and eventually dives into the open mouth of the skull, I had to ask myself, 'What do I want to discover down there?' My imagination answered with the vision of a sea of maggots. I wanted to see a writhing sea of maggots, and for my face to rise up from below the swarm, while singing.

Yes, there were a number of mechanical components which needed to be devised in order to bring some of these ideas to life. Thankfully, I was able to call in the support of a few very great friends to assist me with the design, construction and operation of certain parts. Others, I improvised in my shed and made the final adjustments on set. It is all fairly cheap and nasty, 'McGuyver' kind of shit, but it worked. All that aside, I wanted everything (besides the animation) to be absolutely real. So, what you see is exactly what happened. Me covered in live maggots, me with my mouth filled with live maggots et cetera. How was it done? By crew members tipping buckets of maggots over my face or into my mouth. I have always had a fascination with maggots, spiders, and great white sharks. Unfortunately, great whites are not quite as easy to get hold of. The redback spider you see in the video was also real. Actually, she was a real pain in the ass to work with since that breed is not generally aggressive toward humans. They love to hide in dark crevices. I was the handler for that shoot but no matter how gentle I was with her, all she wanted was to drop away and hide! Of course, I wore gloves since they are very poisonous. I have to thank Garth for his patience for that particular shoot, as I spent a lot of time attempting various ways to coerce her to 'perform' in the way I had in mind. She was one of several, which a friend of mine and I had collected and fed during the weeks leading up to the shoot. Once the shoot was complete, I took all of them to some nearby bushland and released them.

As a big fan of horror films, I have always been a huge fan of practical effects rather than superimposed or computer-generated stuff. From Lon Chaney to Tom Savini, I've always admired the 'Scream Greats' who were not afraid to go the extra mile and really get their hands dirty. Nothing gets under your skin quite like the real thing. The 'lightning demon', as one might interpret me in this clip, was Garth's idea. He had been wanting to experiment with filming me underwater since one of the earlier videos. I loved the idea, but it was one of many which we had to abandon due to time restraints. I am glad this was the case, as it fit so perfectly with 'Twined Towers'. Again, this was a practical approach. Both of us would drop below the water and I would attempt to actually sing to the track which was blasting from a waterproof bluetooth speaker. There is only so many words you can sing (or scream) underwater before you run out of air, so I had have to rush to the surface, coughing and spluttering pool water, between sections. Garth inverted and further manipulated the colors in order to achieve the strange effect you see in the final cut."

"Revelator" is still available on CD, vinyl, and digitally via our EU, US and Bandcamp shops.