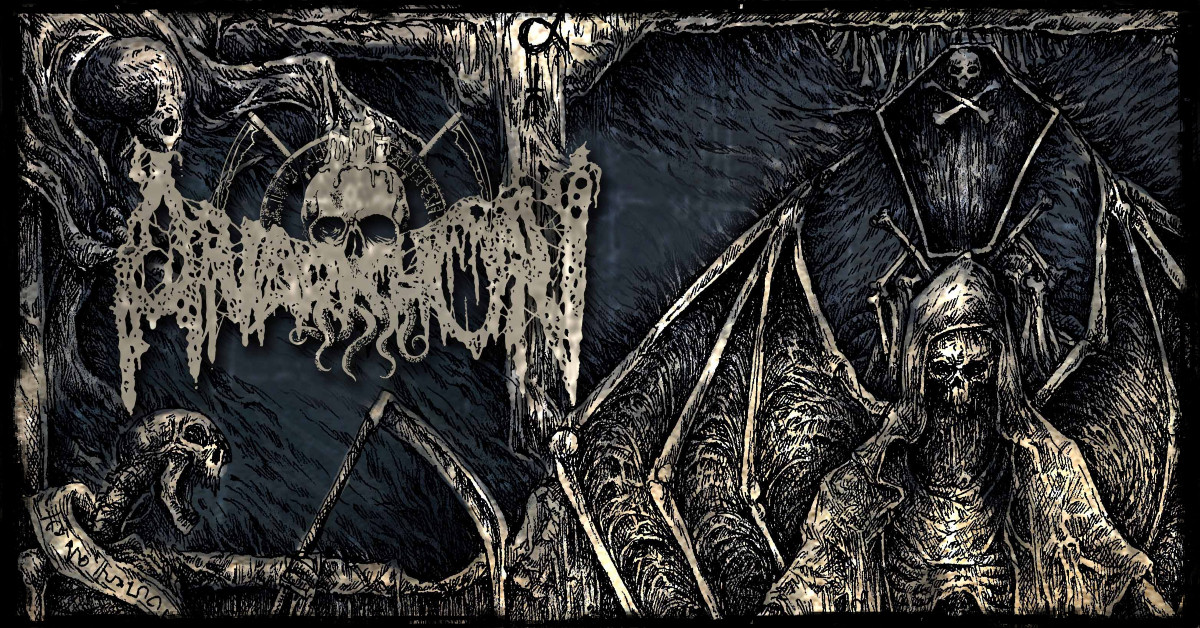 Today, we put the spotlight on 'Poisoning The Air With Abysmal Presences', the second highlighted song from the coming ANARKHON album "Phantasmagorical Personification Of The Death Temple". As the name of the composition suggests, 'Poisoning The Air With Abysmal Presences' is a seven minute long Death Metal trip through the mysterious depths of the earth. Vocalist and guitarist Aron comments on the intentions behind this track:

"This song was the last one to be created for the album, I didn't have any specific band or album in my mind while I was creating it, I just wanted the most terrifying and evil atmosphere possible when it comes to the riffs. Crafting the song a little slower helped to achieve the goal. Lyrically speaking, the title can be interpreted as a metaphor for the "forces" being released into the atmosphere, so it would be a description of ourselves returning from the abyss after a hiatus of seven years ready to poison this "new world" full of false morals and false goodness. Almost everything is done or said in a way that can be "accepted" and it is tried to avoid at all costs the infamous "culture of cancellation". This fear even reached the Extreme Metal scene, the result was catastrophic with artists afraid to express themselves freely and giving in to the current modus operandi just to gain some kind of “fleeting notoriety” on the internet. This world, this kind of world needs to be "poisoned" by the most hideous things from the abyss, that's my musical vision behind this track."

The first harvest of the collaboration between us and ANARKHON will be a vinyl version of the latest album "Phantasmagorical Personification Of The Death Temple", which was originally released on CD via Soul Erazer Records in September 2020. The fourth long player may be described as a killer compendium of cryptic, Lovecraftian old school Death Metal - each and every enigmatic riff possessed with the majesty of arcane knowledge, every rotted atmosphere and bludgeoning rhythm on point, each otherworldly vocal inflection a coffin dragged into ancient depths. Seven compositions force the listener into the abyss and make sure that there is no return:

"Phantasmagorical Personification Of The Death Temple" will be released on vinyl on March 26th. Pre-orders are possible from now on via our EU, US, and Bandcamp shops.