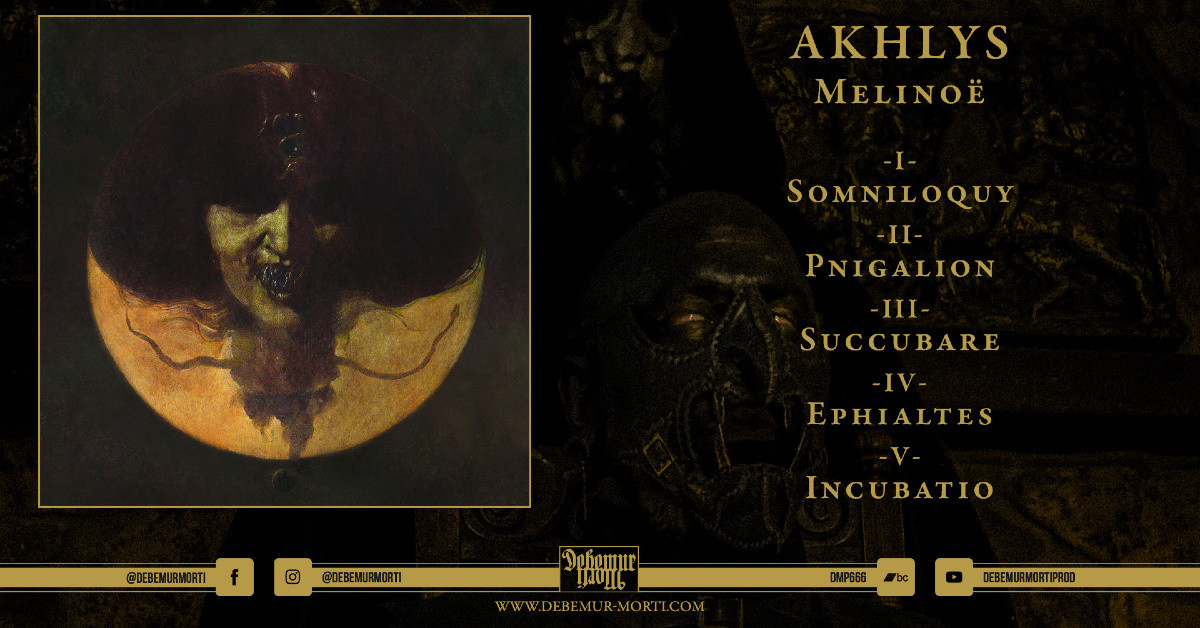 The mundane world could not wait any longer for the nightmarish revelation brought about by "Melinoë", the third AKHLYS album. Alas, who are we to stand in the way of this furious demonic force that wants to unleash itself ? Today, we are proud to premiere - about a month before the official release date on December 18th - the full album stream of "Melinoë".

A lot has changed in the art of AKHLYS, since Naas started composing music and released the first album "Supplication" in 2009. While the second long player, namely "The Dreaming I" (2015), was already hailed as a masterpiece by press and fans alike, "Melinoë" highlights even further Naas' constant development as musician as well as lyricist and his unbending will to give musical substance to esoteric tradition:

"Given that "Supplication" was purely a Dark Ambient album, there is naturally going to be quite different elements musically speaking. As far as overall vision and voice, I would say that the entire concept, over the years, has been refined to a level of such potency that it has taken on a spirit all its own. It is unique, quickly identifiable and it radiates an aura that is native to the concepts that inform it. The lyrical approach has also changed throughout the years and is more classically framed within prose and poetry making it far more intentional regarding placement, meter and so on. More importantly, the experiences I have drawn from have been considered over a longer period of time and interpreted through a lens of deeper insight", explains Naas himself.

"Melinoë" can now be streamed on Youtube and Bandcamp.

Followers of Naas' artistic career (NIGHTBRINGER, AORATOS) already know that the American Black Metal musician has a keen eye for detail and works rigorously until all elements - be it musical, visual, or lyrical - fall into place. Unsurpringsingly, the first two released singles - "Pnigalion" and "Ephialtes" - matched and complemented each other in their approach to embody the vision behind "Melinoë". Now, all compositions are audible in the carefully crafted context of the whole album. They are integrated in a specific track order whose dynamic is especially important to unleash their full potential:

"When I began composing and tracking what would become the first song of the album, which I tend to do in tandem, I tried to envision the album’s opening. I wanted to set an immediate mood with straight forward dense synth that would be followed by a rising composition with the Metal instrumentation, a brief pause, and then all hell breaking lose. I really wanted to capture the dread and ultimate panic of the experiences that inform the project and assault the listener with it all. From there a natural progression unfolded, which you can see between the first and second track especially. It all arose quite organically from there and started to relay a sort of story like progression from song to song. The Ambient track was just as intentionally placed as the album sort of shifts a bit, diving a bit deeper after this point. The final track I knew had to be completely grand and epic in scope so that took a lot of thought. I composed all of the syhths, from beginning to end, on that track first, and used the atmosphere to guide the rest of the work."

As AKHLYS has taken on a life of its own, listeners may rest assured that "Melinoë" won't be the last demon to be set lose onto the world. Until then, rejoice in the nightmarish and terrifying atmosphere the mixture of intense Black Metal and evocative Dark Ambient has to offer!

"Melinoë" will be released on CD, vinyl and digitally on December 18th. Pre-orders are still possible via our EU shop, Bandcamp and US shop.