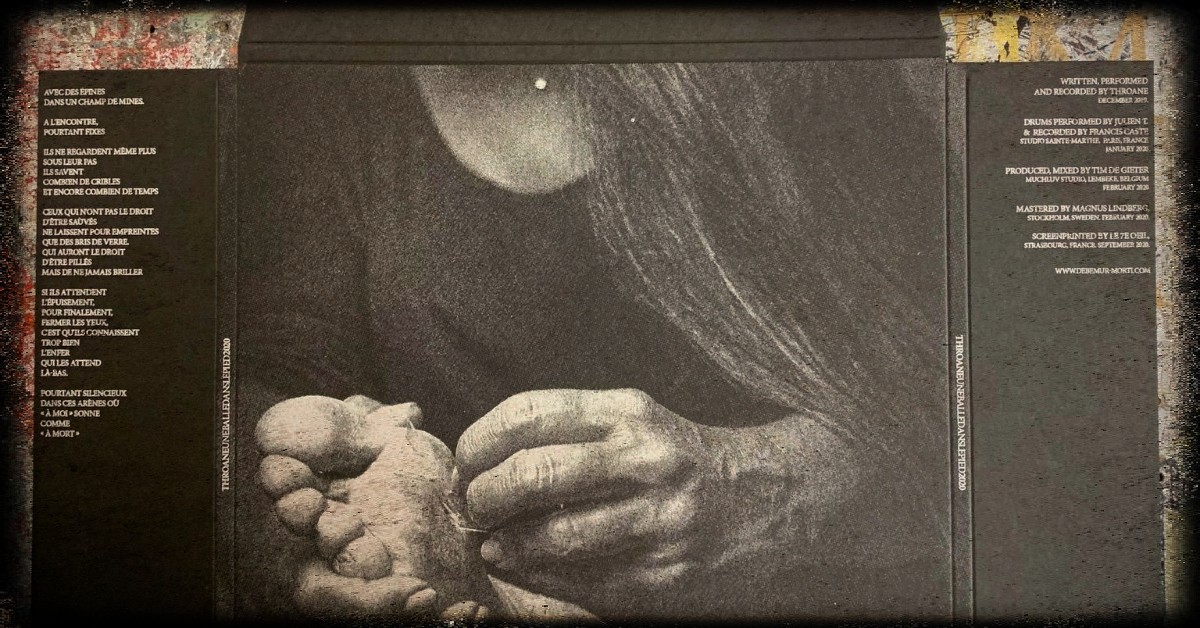 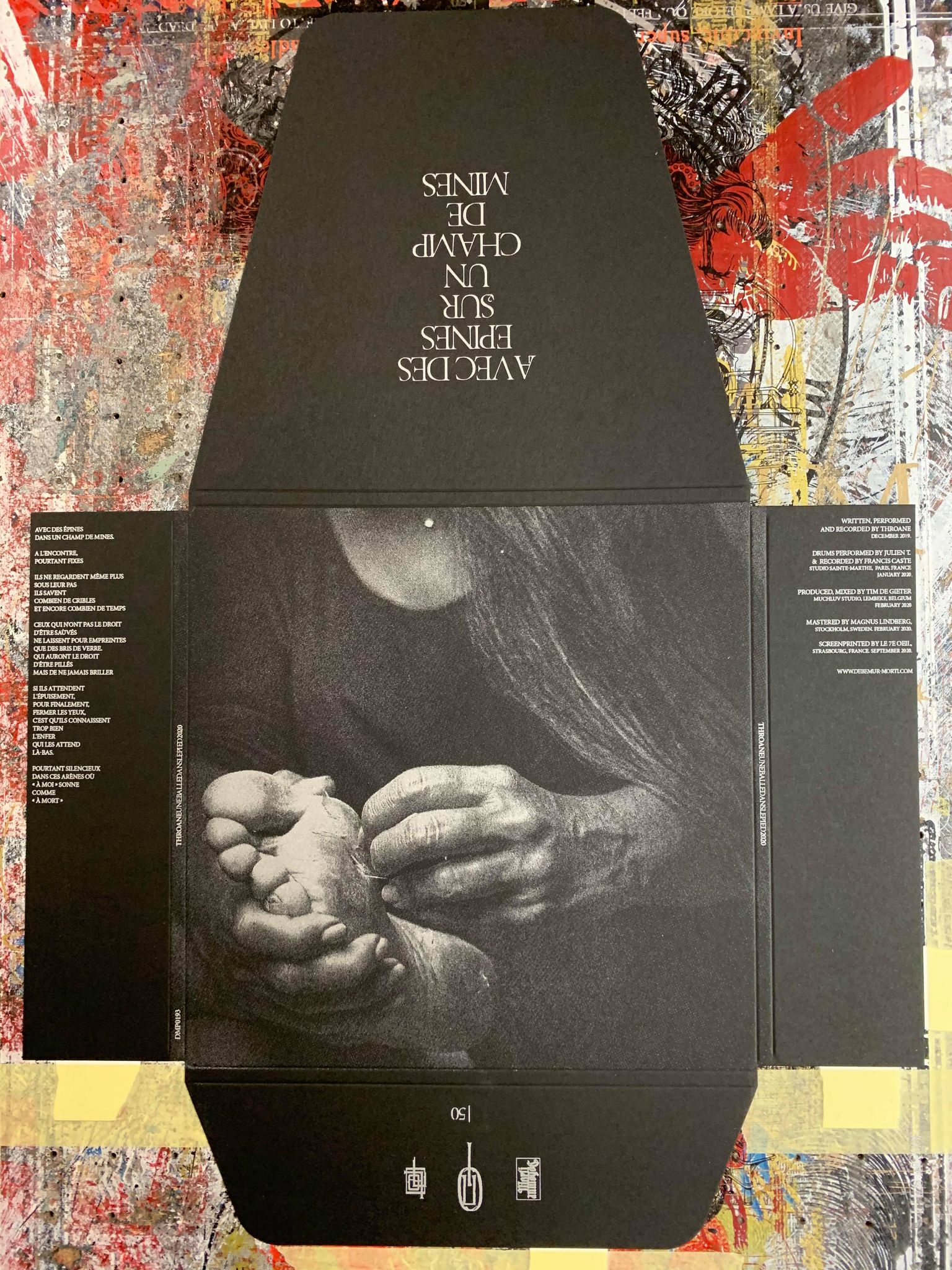 visuality and musicality merge to a unity which surpasses the usual aesthetic approach of Black Metal and related genres. The use of highly personal motifs - e.g. placing sole-composer/artist Dehn Sora’s sister on the cover-artwork of “Une balle dans le pied” - and the will to visually represent musical darkness through layout and design clearly shows that the listener should take pictures and their symbolism into account when trying to understand and “feel” the music of THROANE. It goes without saying that such art demands to be issued in quality packaging and so “Une balle dans le pied” will be released as a 7" vinyl/CD/Digital download, the whole encased in a hand-made screen-printed sleeve by Le 7e Oeil.

Jonathan talked to Dehn Sora about his personal interest in vinyl releases, his love for physical formats and his artistic/multimedia background.

Q: Dehn Sora, many thanks for taking the time to answer these questions! Your EP “Une balle dans le pied” will be released as a combination of 7’’-vinyl/CD/digital download, so on all three main formats of the 21st century. As a graphic artist and a designer, was the format of the release particularly important to you? Does it mean something to you emotionally to see your music released on “black gold”, rather than just CD or download?

Part of my reflection over the past years has included how form aligns with substance. I am a vinyl collector and I feel strongly attached to the format and its physical approach. The visual aspect is inseparable from the aural, and I think in both terms when it comes to crafting a release. There is a sense of understanding in beholding the full package. The idea of having a silk-screened case came naturally to me. The thin and vulnerable aspect of silk-screen printing made absolute sense for this release. Having a tangible experience, as well as audial and visual is important for me. Two different experiences are also possible with the CD and vinyl formats: both have their own unique structure, and the song is divided into two chapters for the vinyl version while on the CD-version the song appears as a single track. The idea was to have these two possibilities in one release. The short format of the EP was a good opportunity to experiment in these terms.

Q: Regarding downloads: physical products are becoming less and less important and more something for committed collectors and fans of artists and bands. Would it pain you to see your art “simply” being released as a download should the future march into such a direction? Would you see something lost in the absence of physical presentation? And if yes, what would be lost?

I still think the physical aspect of a record is important. It makes it more real and makes other significations possible. It also adds another “engine” when you record it. Questions emerge like: is the substance strong enough, does it have the right feeling to be printed up onto a physical format? Digital formats can be convenient for the practical aspects of listening to music, but in my opinion a record receives another dimension when you can feel it in your hands. You can get lost in the artwork. I mostly hope that physical aspects will be thought about differently than they are now - taking advantage of the digital age to meld it with different mediums is good - but physical formats should not be abandoned. 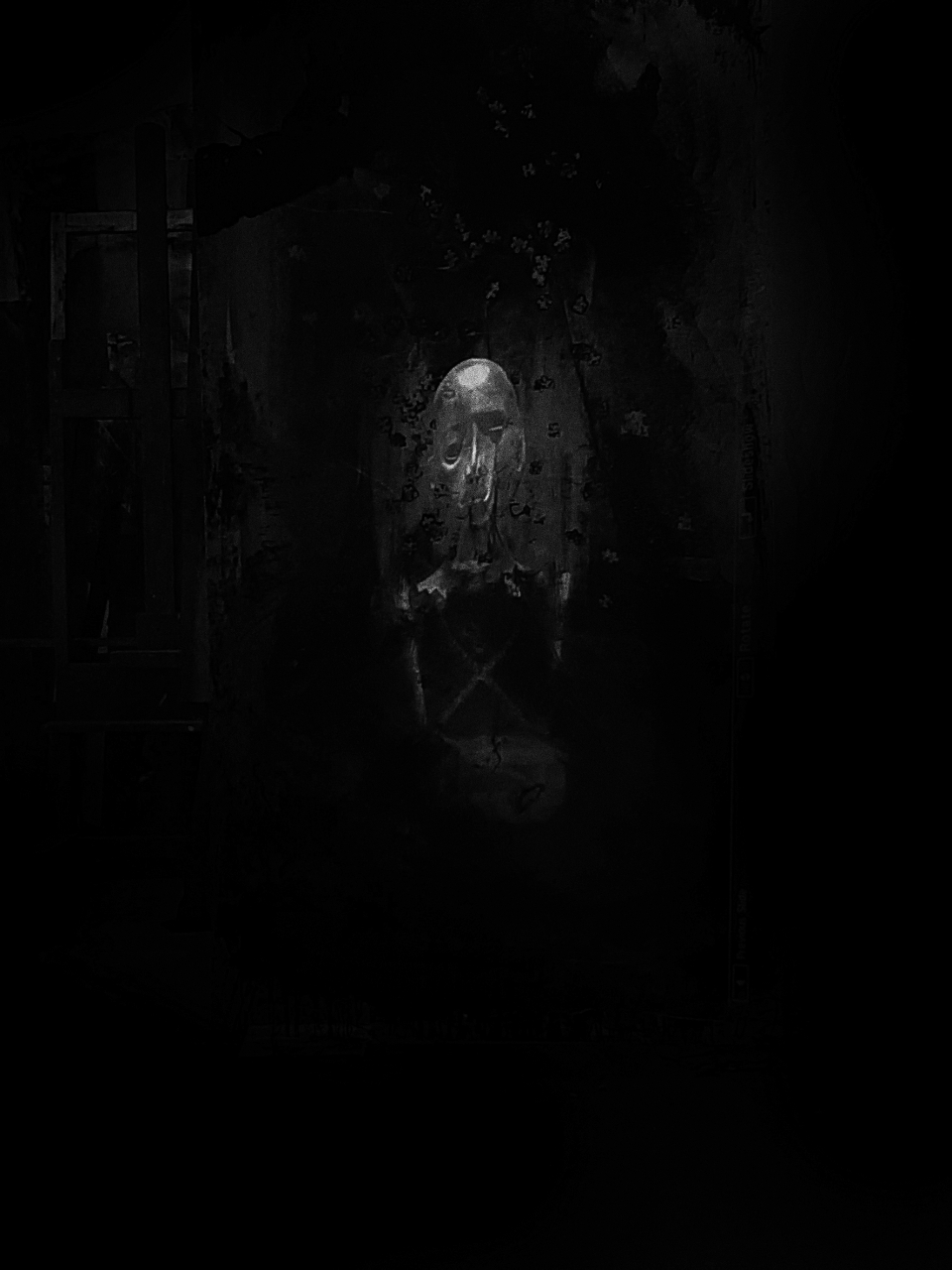 Q: Obviously, the cover-artwork and the whole design/layout of THROANE releases are an integral part of your art. When you start working on an artwork and on a layout for your releases, how do you begin? And do you specifically think about how the artwork and the design will look like on vinyl, CD and maybe even on cassette?

I work around an idea, let's say a general vision. In this case, it was clear in my mind that I would create that image of shattered glass planted into a foot. I then live with the idea, turn it around. Generally, I am sure myself if a symbol gets stronger when experienced in reality. After everything was set and done, I opened up my foot by breaking a glass on it which turned into a profound scar. And I had to get a tiny piece of glass hidden on a nerve removed from the foot.

I don’t really think in terms of format before being sure of the image I want to express. This part happens in the last phase of the layout, the general design. I sense it more as a matter of making things work and the image needs to be understandable at first glance during this phase.

Q: Can you tell us more about the photo for the cover-artwork itself. As already mentioned, we see your sister on the cover-artwork and the picture is a representation of the saying “Une balle dans le pied” (“A bullet in the foot”). But how did the photo develop? How does shooting work with your family members? How does it feel to integrate your own family into your art and grant them such a prominent place alongside THROANE’s music?

The first ideas for the artwork came without any human intervention but felt wrong as a cover (this visual ended up as the label disc and artprint image). THROANE has always been a solitary experience, but if it can be a catalyst for myself, I will open it to very close individuals. If I can vanish behind the music and visual aspects and not be present as a central part, that works best for me. Some people around me need to express themselves and go through a lot in their lives. If my art can be a space to affirm, validate, and help to go through those hardships, everything again makes more sense.

I see the paradox between the image and the title. In part, the title talks about a self-destructive approach. In another way the image should feel like a cure, a healing process. But not knowing if the picture’s movement shows removing the shattered glass or planting it blurs the interpretation, which I would like to leave to the listener.

Q: Last question: Do you follow any kind of artistic or design school in creating these cover-artworks and generally the visual designs/layouts for THROANE? Are you inspired by certain art theories or visual artists themselves?

I spent two years in a multimedia design school almost 15 years ago. This gave me a basis on how to structure ideas, and how to gain a technical approach regarding mediums: digital and/or classical techniques. But I feel that most of my progressions are done by putting my hands in the mud. To try and try again. I never feel that confident in myself, but I felt a switch back in 2011/2012, when I started to feel more legitimate when proposing creations. I consume images every day, so I am surely influenced by many artists and theories - lately, I have been taken with artists such as Aron Demetz and Martin Gusinde - but I try to digest them. My idea is neither to pay tribute, nor quote, but to propose my own interpretations. Influences can be found, for sure, it is difficult to propose something unique. But my state of mind remains that way.