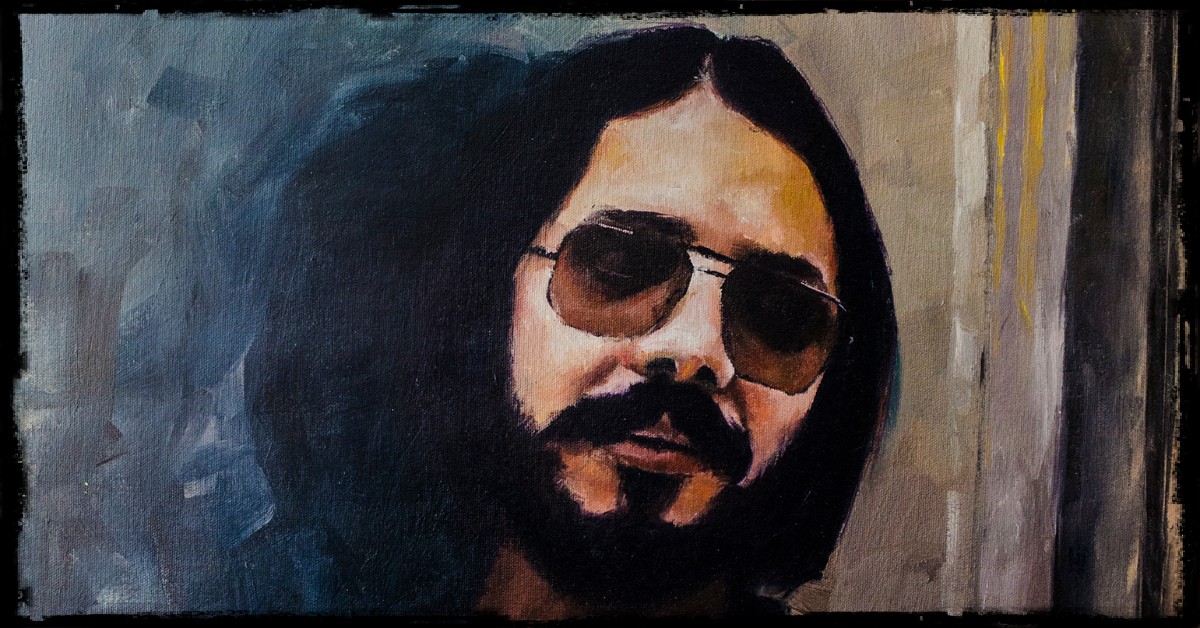 In order to shed light on the visual Artists involved with the albums we release, here we present an interview with 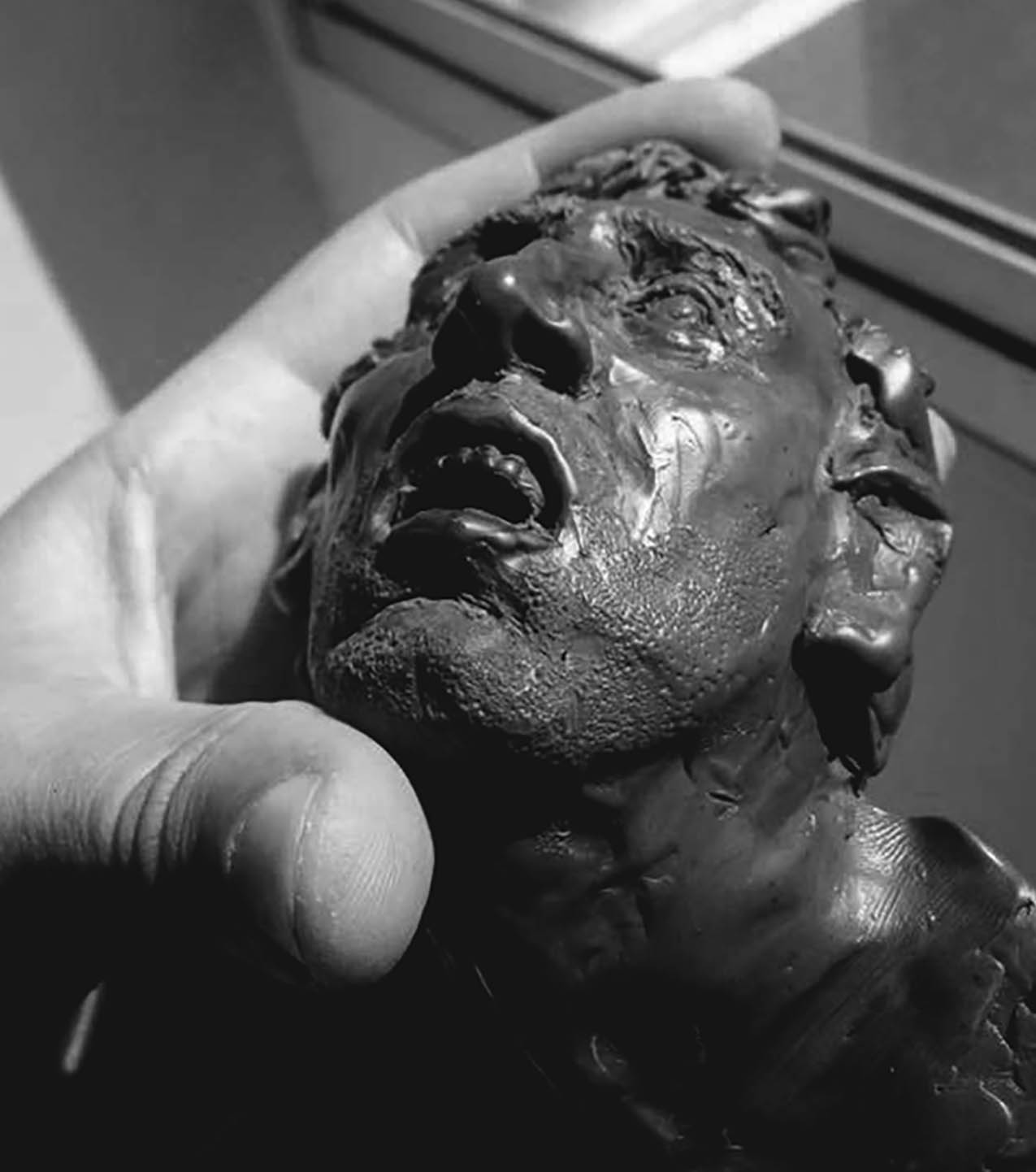 Fabio Rincones, a Venezuelan artist whose sculptures are featured throughout the packaging for new SELBST album, "Relatos De Angustia".

Robert & Jonathan probed into the mind behind the haunting imagery connected to one of the most darkly emotive releases of 2020.

Q : Would you mind telling us a bit about these pieces you have created for "Relatos De Angustia" and the layout therein? What did you mean to evoke with this imagery? Were any of these concepts preexisting in any form or were they all created exclusively for the record?

At first when N and I started talking about the artwork of the album we had the idea of working with sculptures and making something different because I already had made paintings for his previous releases, even though in the very first tape he recorded he used a sculpture I made, this new work would have more thought put on about the ideas and concepts of the album. The idea mainly was to have a single human figure evoking the self and symbolizing the self-destructing nature of humanity. I had constantly in my mind the image of “Saturn Devouring His Son” by Goya, because more than a highly technical detailed work, I consider it has a raw expressive and primal nature and also unsettling, uncanny features like the mutilated son having proportions of a grown man and Saturn being massive and ravenous-vicious but also having a frightened look. It came to my mind also images of artworks by artist Kathe Kollwitz or paintings like Ilya Repin’s work “Ivan the Terrible and His Son”, I wanted to evoke all of those features and feelings in some way that I can think and pair up with SELBST’s music.

Q : Maybe we can talk a bit in detail about the cover-picture of the sculpture for “Relatos De Angustia”. The interesting thing is that this person is swallowing himself, starting with his own fist. What does this “swallowing” symbolize to you personally, what do you associate with it? And why did you specifically let the person swallow his “fist” and not some other part of the body? Is there a specific reason?

Well the whole idea of being influenced by this “Saturn Devouring His Son” painting and images like that, but also having to experience and being surrounded by an environment where you can see at first hand many examples of nihilism and decay, reinforced the concept of self-destruction, but I wanted to portray those characteristics and feels in one single character, not as someone inflicting or destroying somebody else or a group of people, but inflicting damage to himself. The idea of swallowing himself as a primal need of sustaining life, to feed, to survive but paradoxically obliterating his own existence. What symbolizes swallowing his own hands until the point he reaches and crushes his own head is the idea of negating the will to create or do anything else but destroy what constitutes him. 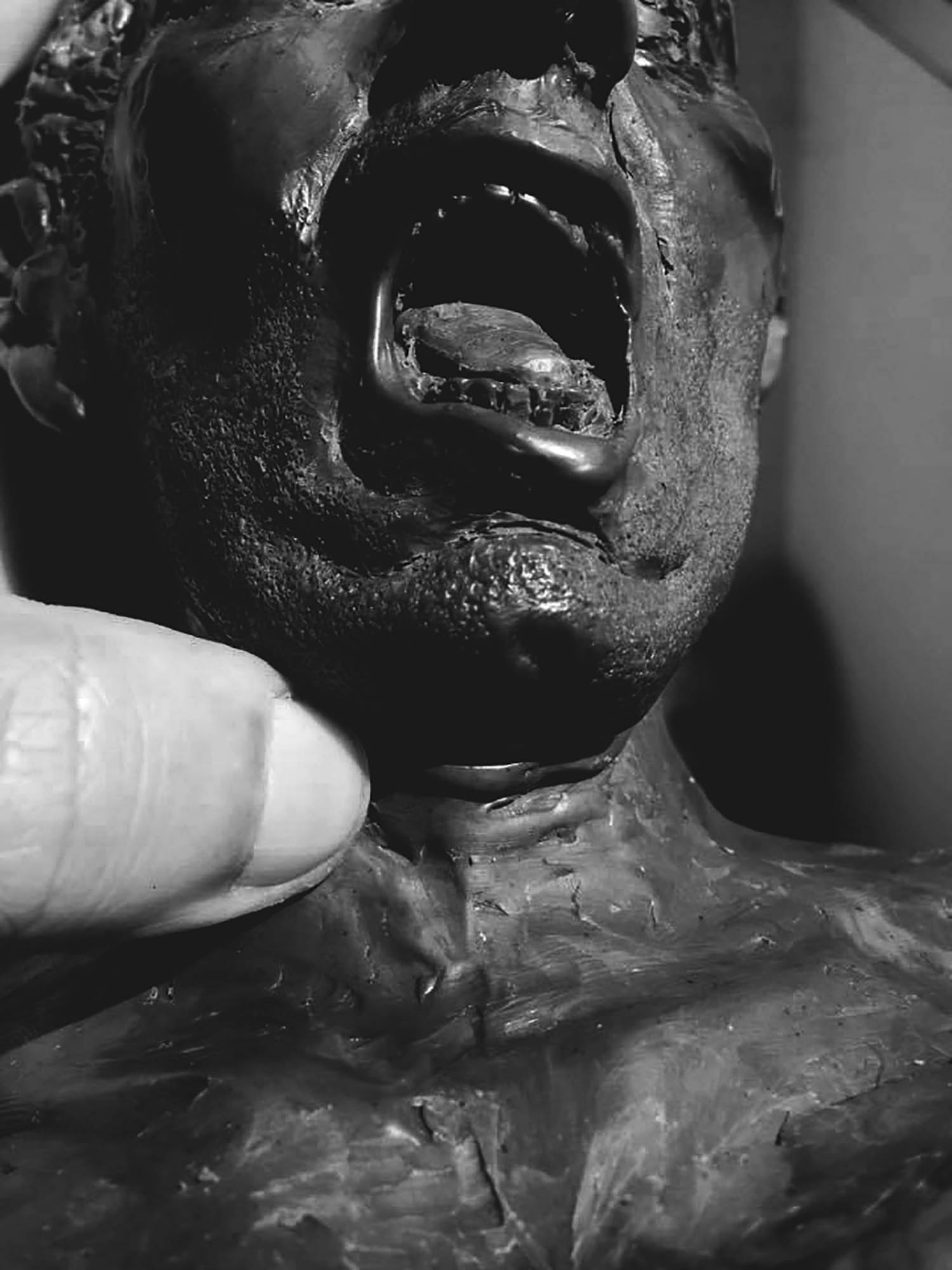 When it comes to sculpting there needs to be some planning, how it´s going to be built up, which mediums and such things, specifically if it will have specific details that would symbolize certain ideas, but with this process it was a little different. I prepared three wax scale models, very detailed and already depicting anguish facial expressions and poses, it was a more traditional way of making a representative-figurative sculpture, in fact I was expecting to make molds and cast them in plaster or resin. Afterwards I took a lot of photos which I showed to N to see if it would work for him just like that, but he asked me to push it further and find something more extreme. I kept then in wax because I expected more modifications and corrections to be made and the work mainly consisted in that back-and-forth process. It turned out to be more of a performatic process where the figures would be transformed, I would twist the pose until it started to be more of a “torture”, dissecting, burning and mutilating the sculptures, there wasn’t much planning about how it would look in the end but working that way added much more to what we were looking in the first place. there was nothing left but unrecognisable remains of the sculptures when I finished.

Q : How important is listening to the music for which you are designing art when creating these pieces? Did you listen to the album “Relatos De Angustia” often while you were creating the design and the sculptures, et cetera? 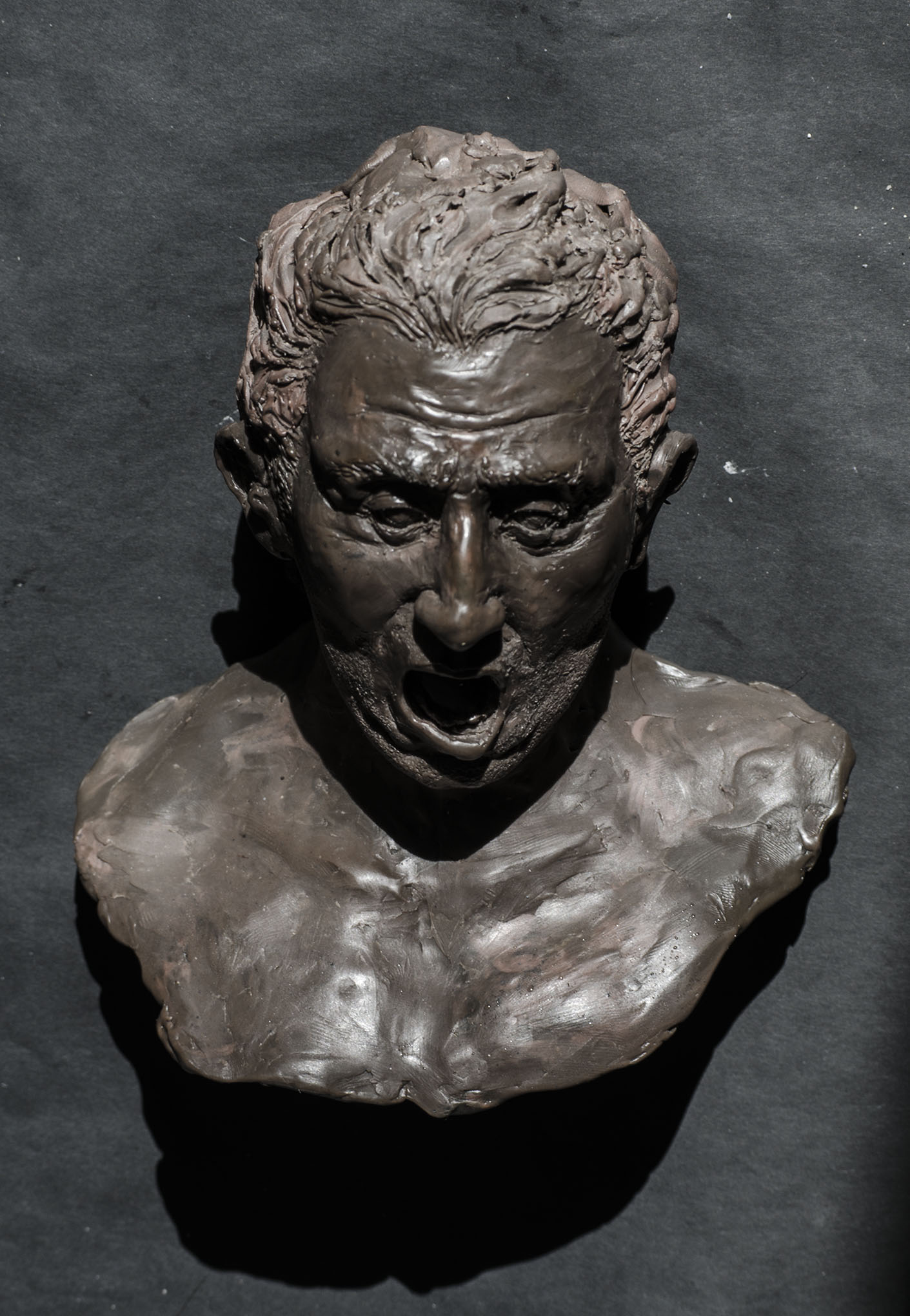 Since I’ve been knowing N for years now, I kind of know what is he looking for, but with every project there’s something new and its always changing, the work turning more and more complex. Listening the music is an important part, although I couldn’t listen the whole thing, we talked a lot and like I said it was a back and forth process, he showed me some of the process of the music too, the vocals and such.

Q : In addition to their newest record, you have worked with SELBST in the past as well as other bands such as AVERSIO HUMANITATIS and IGNIS HAERETICUM. How does working with a band affect your creative process? Does creating from a curated piece of music pose any unique challenges? How much influence does the band have on the final product?

Yes, I mean every band like the ones mentioned, have some things that are very specific, things that they are looking for with every project and differ one from another, for example the time I made some artwork for IGNIS HAERETICUM it was more arcane-religious (or anti-religious) oriented. But with AVERSIO HUMANITATIS and SELBST always have been more abstract and metaphoric ideas even if it’s always figurative-representative art, there is a lot of the inner self and metaphors going on in the concepts of each project and this ideas are reflected in the final artwork.

Q : In general, what are some of your inspirations for creating your art? Are you a fan of black metal outside of a professional context? 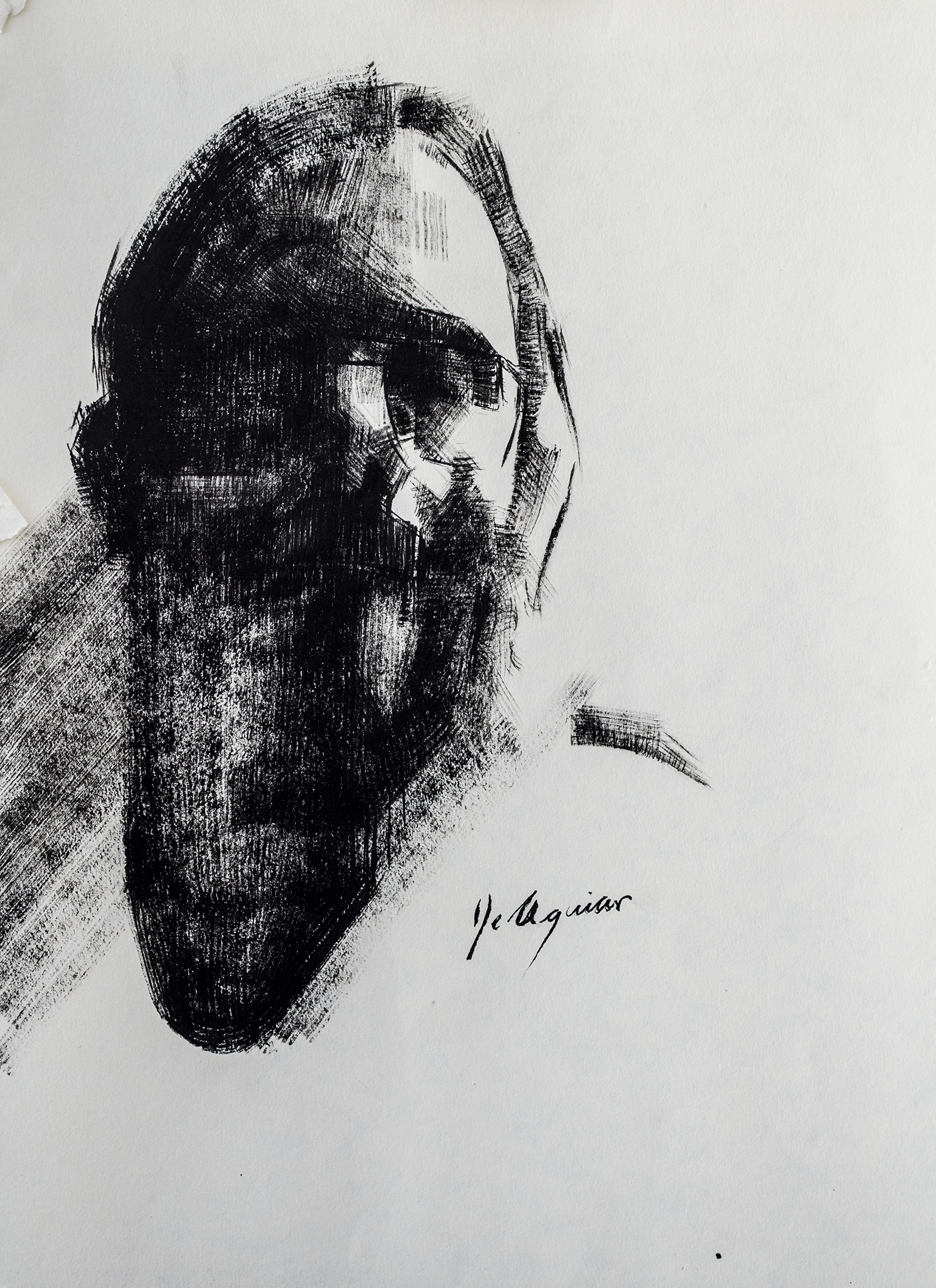 I listen black metal but I have like a mixed bag of things I see and listen, I could be listening some darkwave, minimal electronica stuff and then from BLUT AUS NORD, DEATHSPELL OMEGA, FURIA, MURMUÜRE to AMESOEUR, ORANSSI PAZUZU, ULVER and such starts playing. I listen many styles and genres of art, music, films. There are things I see when I take walks that triggers ideas as much as watching films or listening music. For example when I made the art for the EP “An Ominous Landscape” for SELBST I couldn’t stop thinking of a whole tree extracted and left out of the ground I saw where I used to live in my hometown. I just thought of the idea of a tree turned upside down detached from its natural environment or being there in an environment but giving an image and vibe of not being capable of feeling connected, even if that environment was ominous and hostile.

I am always preparing exhibition work at galleries and recently a group exhibition opened in Budapest, where I am participating with a group of artist from around the globe (Hungary, USA, Brazil, Spain, Chile, Venezuela), that’s part of the work I do more often, curating and preparing art exhibitions (mine and others artists), being able to help exhibit and see other artist's works too is always great,. Also I work a lot with coldwave-darkwave synth driven band called CRYING VESSEL from Switzerland which released a album recently and I helped create some artwork for them. Sincerely the whole crisis in my country and through personal experiences I learned not to be too attached to my own work but I always enjoy the process of making it, like with SELBST how it turned out being more than just making a sculpture. I also enjoy the capability it has to reach and help communicate ideas especially if it’s in service of projects like SELBST.